The medieval plague doctor, with his waxed robes and beaked mask, has always been an important part of my internal horror landscape. So much so that when our own real-life pandemic hit, a plague doctor sticker giveaway was the first thing I thought of in order to try to cheer a few people (and myself) up in the early weeks of the tragedy. I’m happy to report that it did just that! I sent out lots of letters and everyone who requested them was delighted to get a little “extra” with their stickers: a little sketch of a plague doctor (often with a big heart on his robe or doing something silly like pushing a shopping cart) telling them to “Stay Safe!”

Now that the giveaway is over, I thought it might be nice to commemorate the event with some more glimpses of plague doctor madness.

First up is all the amazing plague doctor items I’ve gotten from my generous and talented friends! To see more of Courtney (NonDecafArt)’s art and masks go here, for more of Cora (Cola_Problems)’s art go here, and to see more of the great things in the Nick Nackery go here! 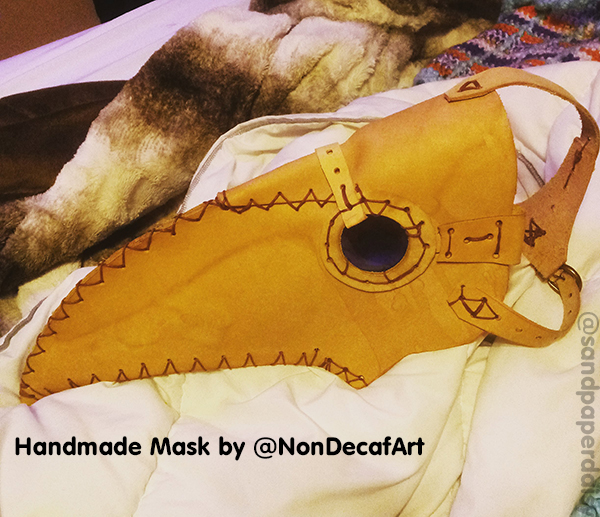 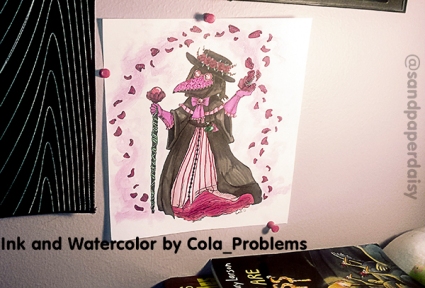 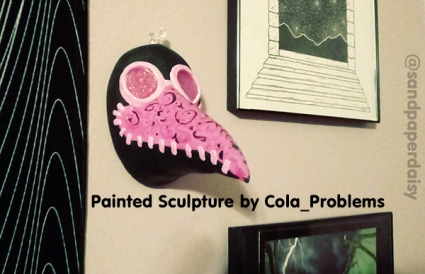 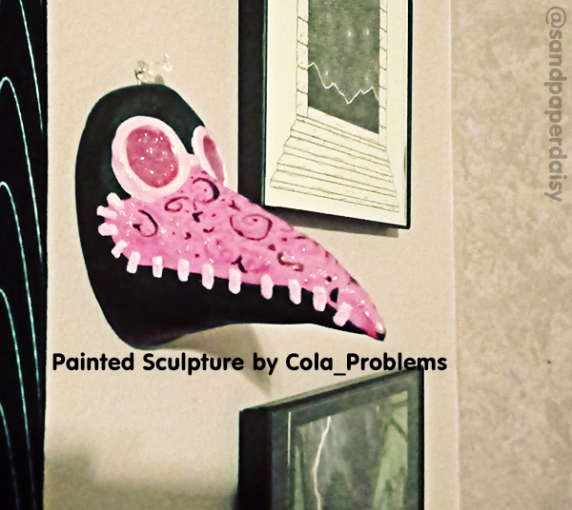 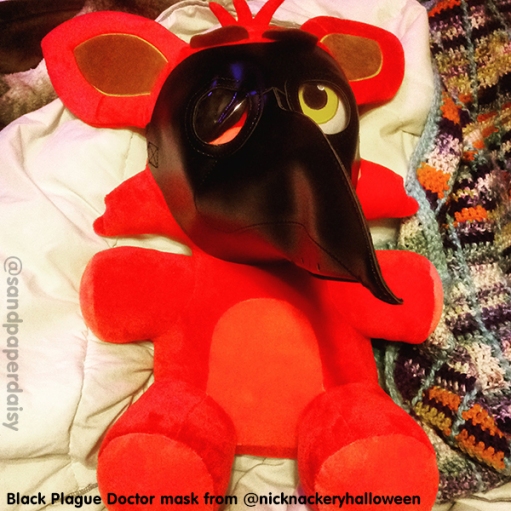 Next up I’d like to share with you a couple of plague doctor related panels from a comic I’m doing called The Ocean. It may be awhile before I finish this one, especially since it’s a little too close to home at the moment, but feel free to look at the several pages I’ve got so far. 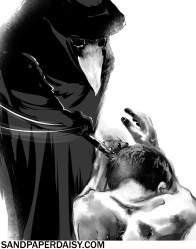 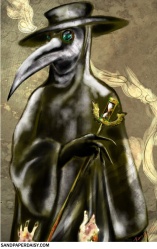 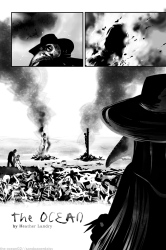 Thirdly, I would be remiss if I didn’t talk about the SCP Foundation, a rich repository of free horror and uncanny fiction that has its very own plague doctor in the entry SCP 049. Constructed like a fictional research and containment foundation, the scp archives and its surrounding community of talented writers, artists, game developers and youtubers will leave you with an everlasting brimful of scary and imaginative fiction. There are something like 4000 entries now. TheVolgun is one of the most celebrated SCP-based youtubers and voice actors out there, and his interpretation of SCP 049 “The Plague Doctor” is the definitive interpretation for many people.

My love of plague doctors and all lore surrounding the black plague predates the SCP Foundation, however. Back when I was a child I enjoyed reading through Time-Life’s Enchanted World series every chance I got. One of the books, Ghosts, dealt heavily with the plague. Its pages showed chilling art by Bruegel replete with laughing triumphant skeletons and coupled with poem stanzas like these:

The lantern-bearer lights the way,
For those who no more seize the day.
Blind eyes peer out from every head,
That crowds the carriage of the Dead.

Not crown nor coin can halt time’s flight,
Or stay the armies of the night.
King and villain, lad and lass,
All answer to the hourglass.

It was these fearsome “armies of the night” I pictured when I began to write my novel. 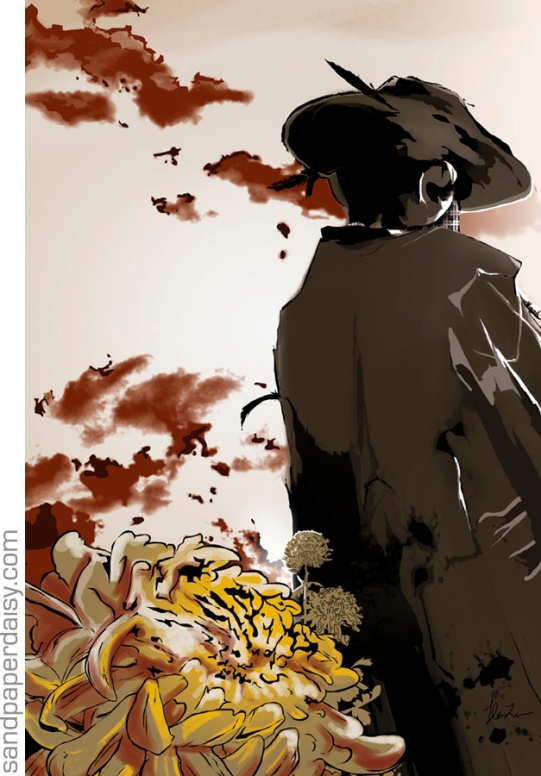 The heavily cloaked and gloved “Resurrection Men” from chapter one owe much to my terror and fascination with plague doctors. I also call them Ankou after another legend you can find in the Enchanted World series (as well as elsewhere), and they have a healthy dose of A Gentleman from Prague, which is one of my favorite short horror stories. Here’s an Ankou I drew for the October Sketch Challenge I did a long time ago. 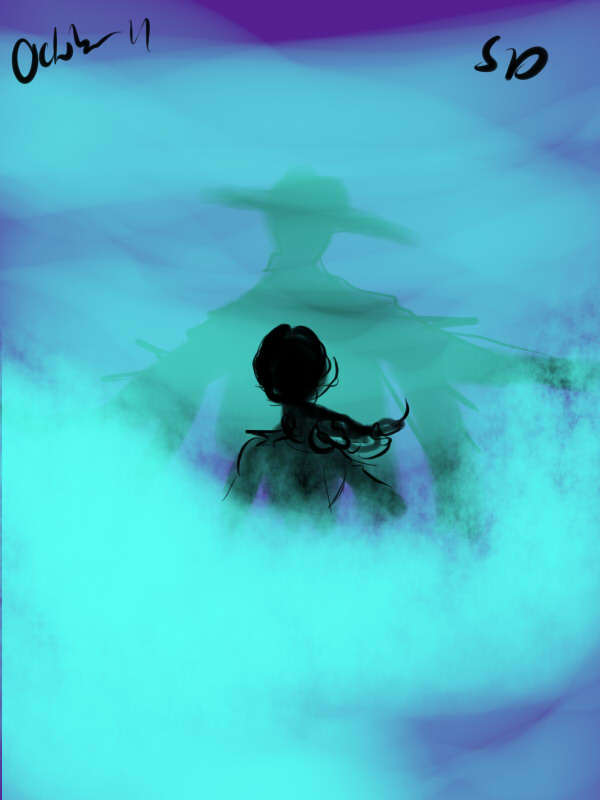 In 2019 my friends succeeded in getting me hooked on The Magnus Archives, and this series as well has a healthy appreciation for the horrors of the plague and the cloaked and hooded strangers that creak heavily from house to house in their cart, calling for the dead to be surrendered to their dubious care. I couldn’t resist drawing two such characters for this past October sketch challenge. And I haven’t even touched on my gaskmask obsession!! 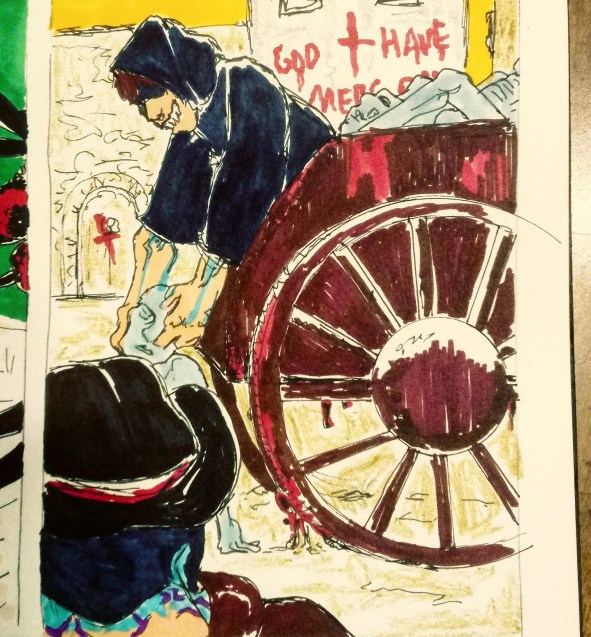 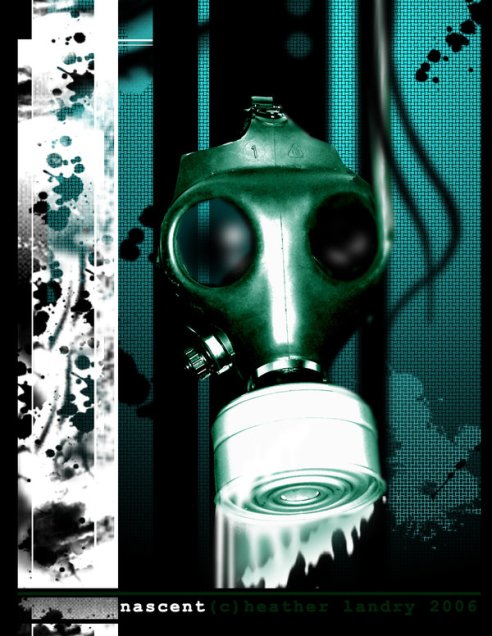 Someday, I might gain some sort of deeper insight into my utter fascination for the obscured and sinister stranger, whether it takes the form of the beaked plague doctor, the grinning skeleton from whom all trace of humanity has been removed, the menacing figure in the fog, or the alien glitter of a gas-mask’s goggles. In every case, you can’t quite be sure that the stranger under the mask is really human, or benign. And in my favorite movie of all time, John Carpenter’s The Thing (1982), even human features can be a lie. What lies beneath might not be human or friendly at all. 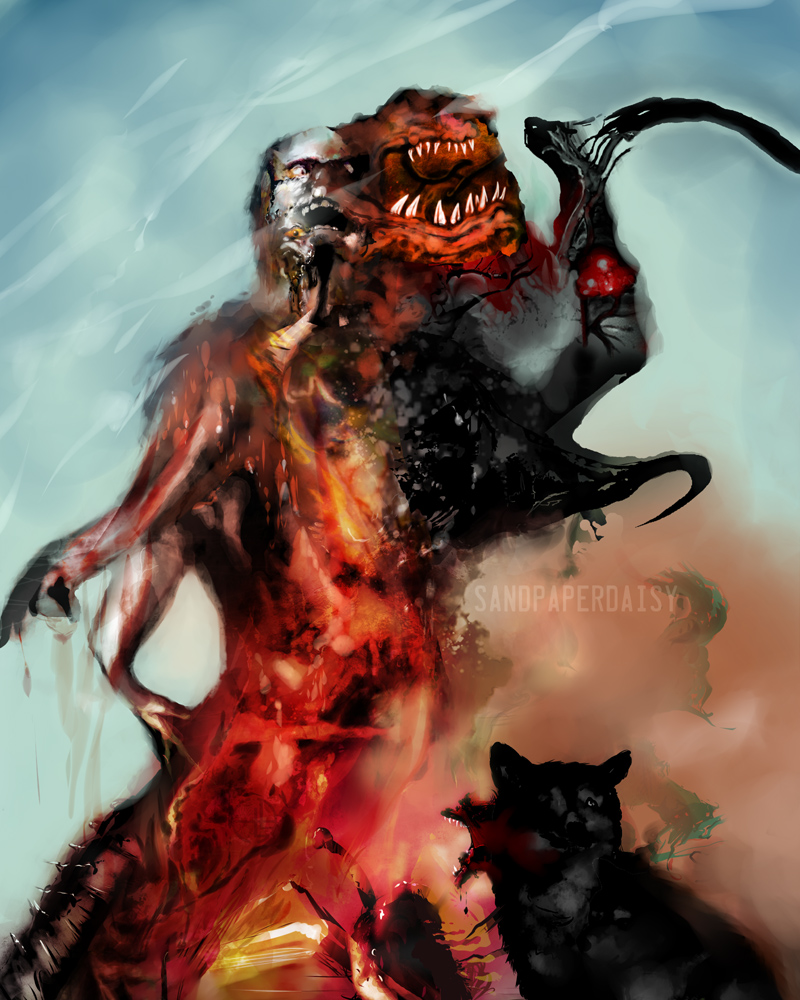 I wonder how many of you have been similarly in thrall to a lifelong fascination with menacing strangers and obscured faces? I’d love to hear about any other legends or creatures you’re fascinated with (or terrified of). Feel free to tell me about them in the comments!

This site uses Akismet to reduce spam. Learn how your comment data is processed.