A lot of people have resonated with this cute digital painting of two children navigating the sea of outer space on their home-made rocket, powered by a star. I’m even proud to say it took 1rst Place at Digitized back in 2011! It’s knocked around town in several places and forms (more on that next post) and finally come to settle on Society6 and Redbubble. But there’s more to the children’s story:

This piece actually has a place in my personal mythology. The two children are the same kids from Atomic Jazz! 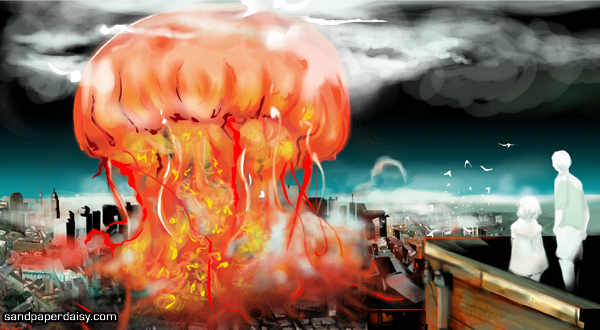 These two children are my son (right now still in pre-school, I aged him for these pictures) and the little sister I thought he might end up having one day. This little sister is also one of the two possible children filling out the mysterious raincoat in The Seashore:

I made these three pieces when I had my son and was aware I was going to have a younger child to accompany him through life, but didn’t know if it would be a boy or a girl. The little girl would have been called “Violet,” and so that is her name in these pictures. I did eventually have my second child, a merry little boy! And so “The Seashore,” which I deliberately kept ambiguous, turned out to be the first picture of him in my series of fantasy children.

This site uses Akismet to reduce spam. Learn how your comment data is processed.